Not Feeling Retirement Ready? 6 Painless Ways to Beef Up Your Account

When asked to share their financial regrets, respondents to Bankrate's 2016 Financial Security Index survey named “not saving early enough for retirement” most frequently; nearly a quarter of respondents over the age of 65 called it their biggest financial regret.

While the goal of saving enough money to fund several decades of your life can feel like a daunting task, consistent contributions, time, and compounding interest all make reaching your retirement savings goal feasible — regardless of the number you ultimately need to reach.

Here are some ideas you can put into action to beef up your retirement savings and improve the chances that you're financially empowered to retire when, how, and where you want.

1. Act Small to Save Big

Your total retirement goal may be a large number, but it can be within reach if you consistently work to contribute to your retirement accounts — even if the amounts seem insignificant.

Suppose you cut out one or two small expenses each week that amount to an additional savings of just $25. That may be accomplished by swapping your latte for a more boring brew, checking out a library book instead of buying at the bookstore, passing on that impulse buy while you wait in a checkout line, or walking a few blocks instead of hopping into that Uber.

None of these little actions will dramatically impact your life now — but eliminating them may free up an extra $100 a month you can contribute toward retirement. Keep the habit up every year for 30 years and you'll have more than $165,000 saved in your retirement account (assuming you earn 10% in interest each year, compounded annually).

Note: the example does not take into account fees or expenses associated with the investment which will lower the rate of return and savings amount.

If you haven't already, establish automatic contributions that will dedicate a specific amount of money from each paycheck to go into an employer-sponsored retirement account, or an individual retirement account or Roth you've established on your own.

Renowned behavioral economist Richard H. Thaler, author of Misbehaving: The Making of Behavioral Economics, calls automation a "nudge" of sorts. He explains that it can help even the most financially savvy resist their most basic (and irrational) human impulses, like spending when they should save, or procrastinating on when or how much they put into retirement savings.

3. Put Your Raises Toward Retirement

In his book, Thaler shares data about two groups of retirement plan participants:

Group B contributed a greater percentage (4.4%) of their salary up front — but didn't automate the future contribution increases.

4. Invest Windfalls in Your Future

Have you received an unexpected windfall in the form of a tax refund, bonus, or inheritance? Perhaps you've finally paid off that student loan or credit card debt, and now find yourself with more cash flow.

When you're lucky enough to come into some unexpected cash, direct at least a portion of it to your retirement savings accounts.

You'll resist the phenomenon known as “lifestyle creep," which is the tendency to spend a little more freely — and budget less carefully — as your income or cash on hand increases. When you don't see the money, you won't miss it, but it will be hard at work behind the scenes, bringing you one step closer to your retirement goal.


When you're lucky enough to come into some unexpected cash, direct at least a portion of it to your retirement savings accounts.

Saving for retirement is easy to postpone when it's decades away; it simply doesn't feel like part of your reality. Dan Goldstein, principal researcher at Microsoft Research and Honorary Research Fellow at London Business School, tested whether seeing images of a "future self" could make retirement feel more real, and if that may encourage people to contribute more to retirement as a result.

Goldstein and his team asked research participants — who were between the ages of 18 and 35 — how much of their hypothetical income they would contribute to retirement.

They then showed the participants age-progressed images of themselves, along with a current image; their current and future head shots were placed on either end of a sliding-scale style line.

Participants were then asked to determine what percentage of their current hypothetical salary they'd allocate to retirement. The researchers found that the majority of participants in the study increased their retirement contributions when they had a visual representation of their future "self" staring back at them.

You can replicate the benefits of this study with a low-cost app that provides age morphing effects. With an image of your retirement-aged self kept top of mind, you may find it's harder to procrastinate on investing in your future.

6. Identify the Meaning Behind Your Retirement Goals

The Allianz Global Investors Center for Behavioral Finance recommends that retirement savers identify goals they hope to achieve with their retirement savings. When you give retirement a meaning beyond money, saving for it can feel less like a sacrifice.

Make a list of specific goals that are important to you in retirement, which may include:

Prioritize these goals in order of most to least important, to give yourself a reminder of why it's as important to invest in the future, as it is in your present.

Tags: 401k Retirement Planning
7 Things All Adults Should Know About Their Finances (Regardless of Whether They Pay the Bills)


Some financial information all adults in the household should know, regardless of how active they are in the daily management of their household finances. 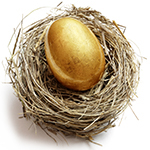 How confident are you in your readiness for retirement?